An autonomous car or self-driving car, is a car incorporating vehicular automation, making it capable of sensing its environment and moving safely with little or no human input.

However, autonomous driving is a broad concept that encompasses a series of driving assistants, also known as ADAS (Advanced Driver Assistance Systems). Depending on the capacity of these assistants to drive the car without human intervention, the vehicle is said to have a higher or lower level of autonomous driving.

Although there are different projects under development regarding autonomous vehicles, there is currently no autonomous car on the market. The videos showing a car in motion without the intervention of the driver are made in controlled environments.

Depending on the level of intervention of these systems in the maneuverability of a vehicle, there are six levels of autonomy, from 0 to 5. The lowest is where the car is not capable of performing any driving function, however simple, on its own, and the highest is where no human intervention is required for any task.

The current scenario of technology evolution allows us to be at an intermediate level. The most advanced cars on the market today have level 2+ and some, under very specific conditions, level 3. Conventional level 2 has become very standardized and it is common to have these driving aids even in relatively low-cost cars.

What technology does an autonomous car have?

However, for a car to drive without driver intervention, or without passengers on board, it needs more than a series of sensors built in: it also must be able to communicate with its surroundings.

In fact, for autonomous cars to become a reality, artificial intelligence and the concept of the “connected car” must be much more advanced. For instance, they must “learn” from the infinite situations that can occur in any driving scenario and allow developers to create new patterns of response to unforeseen events. Otherwise, human intervention will be required when in an unforeseen situation there’s no programmed response.

The development and popularization of autonomous cars will bring with it new business opportunities, as a result of the birth of a totally new industry.
Some businesses will be totally new, as others will need to adapt to the new situation. Some new needs derived from this new industry will be the development of software and applications specialized in autonomous cars, as well as security software to prevent hacking that could have serious consequences.
Legal implications related to this new machinery will need lawyers and technicians to assist companies that want to comply with legislation on this issue. Or even, ethical experts that may define what course of action must a car take in concrete dangerous situations.
Also, there will be a need for data analysts capable of designing systems to collect data from autonomous cars and translate it into useful information for customers.
And many more, such as the creation of platforms for maintenance, technical service of cars and online management or the development of geolocation services, integration with third parties and even in-vehicle entertainment.

As autonomous vehicles are still in developing and testing phases, here are some examples of real use cases, and where self-driving vehicles can bring more value to users.

Robo taxis: driving cabs is a hard task, dealing with traffic and stressful situations all day. That is why this is one of the first applications that is being currently deployed, for example in China or the US.

Trucking: the logistics industry usually suffers from workforce shortage due to the harsh condition of the trucking lifestyle and the effects of the pandemic. Autonomous trucking will solve this issue while providing improved safety, and, as most of the driving takes place on highways, which are wider, less congested, it is smoother and safer.

Delivery robots: Due to pandemic situations, delivery robots became very popular across many closed European and U.S. college campuses over the last year for delivering foods or other goods. But also, these robots can be very useful for last-mile delivery, for their efficiency and low emission which make them environmentally friendly.
Autonomous vehicles are one of the most promising technologies that, although not yet fully realized, we expect to completely disrupt the automotive and logistics sector 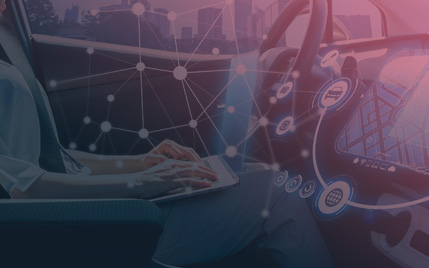