Striking predictions that were made many years ahead of their reality.

When science fiction becomes a reality

The creativity of human beings and their ability to solve problems have been the basis of the evolution of the species. Human intelligence has been able to create inventions that have made it possible to do things with less and less effort. From the invention of tools for hunting or preparing food, to the development of artificial intelligence, human beings have been creating technological advances that have led us to our present world. Creativity is a unique quality of humans that has allowed them to first imagine new worlds and then find ways to make them a reality. And we are not only talking about inventions or technological advances, creativity is also behind great works of literature, movies or television series. In this sense, many have written novels or filmed movies anticipating the future, predicting technological advances that have already become reality. Let’s review some of the most striking predictions that were made many years ahead of their reality. One of the most outstanding is this comic strip published in the Daily Mirror of England, in January 1923. 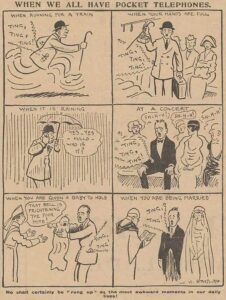 It is simply amazing that when even the landline telephone was not fully implemented, it was already being imagined what it would be like to have a cell phone. Also, in 1953, Mark R. Sullivan, San Francisco, president and director of the Pacific Telephone & Telegraph Co., said: “Just what form the future telephone will take is, of course, pure speculation. Here is my prophecy: In its final development, the telephone will be carried about by the individual, perhaps as we carry a watch today. It probably will require no dial or equivalent, and I think the users will be able to see each other, if they want, as they talk. Who knows but what it may actually translate from one language to another?” This 1953 prediction has proved to be largely accurate.  One step further, this news item was published on April 18, 1963, in the News-Journal newspaper in Mansfield, Ohio. 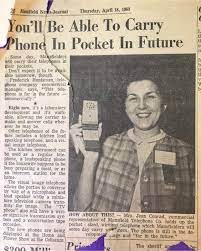 In relation to the cell phone, the unquestionable star of our current life, its “invention” is usually attributed to the Strak Trek series, which served as inspiration for the first model of cell phone designed by Motorola in 1973. However, this series dates back to 1966, after the aforementioned news item. It is often said that ideas flow freely, so we do not know if both predictions occurred simultaneously or if one inspired the other. Cell phones, especially smart ones, can be claimed as one of the greatest technological breakthroughs of mankind. Everything that this technology has made possible in terms of communication and personal freedom was first imagined and then made a reality. Just by remembering what our lives were like only 25 years ago, we can understand how disruptive the invention of the mobile first and then the smartphone has been. This is the spirit that Alaian wants to set in motion: to find disruptive technologies that will completely change our way of life for the better. 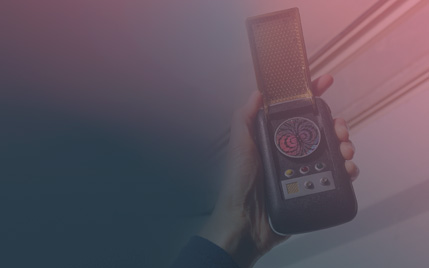